The Google plus pub test

I continually see articles hyping Google+ and if you follow me on twitter you’ll hopefully know 2 things:

1) I actually like Google+ as a network, it looks good, it has some neat features like hangouts

2) other than reserving a presence and setting up authorship I don’t think it’s worth spending much time on, yet

I’m not going to rehash my points on misleading posts/statements that claim g+ is the 2nd largest network, in summary: usage is not the same as active users. If an expert doesn’t understand that they are very different, walk away.

That said there are a few things that I’ve been thinking about recently.

1) SEO benefits: At best guess it’s likely to help having links from g+ as they do pass page rank unlike other networks like twitter or Facebook. See this great Moz blog post, causation isn’t proven conclusively above the fact G+ creates links to your site.

2) Try the pub test: Go to a bar and ask anyone (non marketing/social media types) who’s used g+ more than twice this week to put their hand up – buy all of those people a drink – how much did it cost you?

UPDATE: With Google plus now being in use on YouTube, we’ll get another round of these “G+ is here” type headlines, there really will be no way of knowing the difference between YouTube use of G+ and actual G+ posts… especially when you have to uncheck the “share this on G+ too” box each time.

Log in to G+ who’s actually posting anything in there? It still won’t pass the pub test.

By popular demand (well, one of my colleagues asked), I’ve added a Pinterest pin this button to the L.U.F.T.A email sharing link making tool thingamyjig.

As always, thoughts, input, abuse most welcome… well maybe not the abuse so much…

A couple of weeks ago I went to the brilliant HackBmth hosted at RedWeb and hacked together a little tool to make my (and my colleagues) life easier when creating Facebook and Twitter sharing links to be used in emails, blog posts or anywhere really…

You fill in some fields (without needing to manually UTF-8 encode spaces and special characters) then you get URL’s you can use to spread the word about something..

Now I’ll be the first to admit it was rough around the edges but functionally it worked! Woot! In just one day of coding, some rusty cogs had turned in a cobwebbed corner of my brain and I had a working tool of sorts – I should also add that I haven’t coded properly for a very long time, so I’m pretty pleased.

Today I tidied it up and made a version that anyone can use.

The Facebook sharing tool requires you to make an app at developers.facebook.com first so that you can use the app ID to make a sharing URL –  there’s no coding required, fill in the minimum fields to get an ID… if you need help with this bit, leave me a comment and I’ll write up making an app at a later date.

Please be gentle with it… if you have any questions leave me a comment!

*1 The Facebook example uses my RNLI email links app as the sender, you’ll have your own icon and app name in here

If you’re looking for a review of Facebook home this isn’t it… I’m thinking about how this could play out in the wider market.

>>> TNW – Facebook Home have quite a good round up or you could look on Facebook.com/home.

1) Android fans will hate it, they’ll whine about the loss of widgets, customisation and openness probably.

2) iPhone fanboys (and girls) will not be interested, they’ve likely moved to path or something far more hipster n cool.

So, with them out the way we have two main groups remaining: your average phone user (android but unaware, they think of themselves as a galaxy s3 owner etc) and the average iPhone user.

3) The average user cares about four main things (in roughly this order): messaging/calling friends, photos, Facebook and then apps (music somewhat, but I don’t think that’s the “killer app” anymore). Home quite possibly hits all of these bang on target.

By making it user centric, seamless conversations across text and Facebook messages will appeal, as will activity of friends being tied together.

Apps are still there, they’re slightly hidden but I really don’t think that’ll phase most users.

What about people leaving Facebook/using it less? One of the main reasons people are leaving Facebook is that it’s not people centric, this largely changes that…. but also, the big question…

Ads – this’ll be the maker or breaker – the other thing users are pushing back against on Facebook is ads, if they feature too heavily on home it won’t fly. I’d expect them to add it later, hooking people in at first with a very light touch to advertising. It’s telling that the Facebook share price rose 3% after the announcement too.

Where does this leave your average iPhone user? I guess that depends on the uptake of home, if the iPhone app doesn’t develop, I think there’s a large chunk of users who could move to a Facebook phone that’s more people centric for all of the reasons above.

What about an iPhone 6? Who knows…!

1) I’m expecting Facebook to crack down on companies using a person profile as their Facebook presence in line with a more people centric approach – those gaming the system in this way will initially, quite likely, have an advantage until this happens.

All thoughts, fanboy flaming, comments and paella recipes welcomed below:

One addition to the new LinkedIn profiles is the ability to add Volunteer experience to your profile.

This is a really great feature for both an individual to show support to their chosen organisation and to raise awareness of volunteering in general.

To add one to your profile select: Profile / Edit Profile from the main menu and you’ll find volunteering & causes on the right hand side.

Click this heading to add one to your profile. 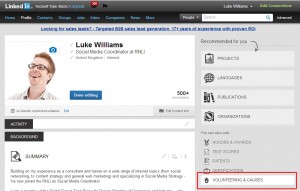 You’ll then see the new section to fill out, as shown below. To add more than one, click the + Add button in the top right. You can also click and drag the up & down arrow to choose where this section sits on your profile. 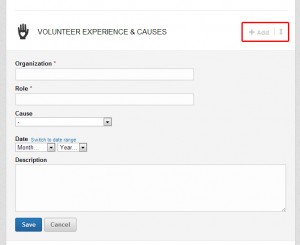 If you just type the name in, there will be no link to the organisations LinkedIn page shown on your profile. 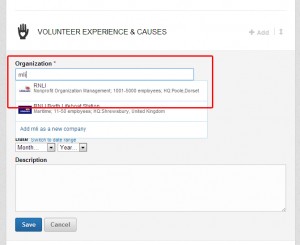 Click Save once you’ve finished or the + Add in the top right to add another.

Once this section is added to your profile, it’ll display the company logo next to it and when someone views your profile they can easily see the organisation you volunteer for.