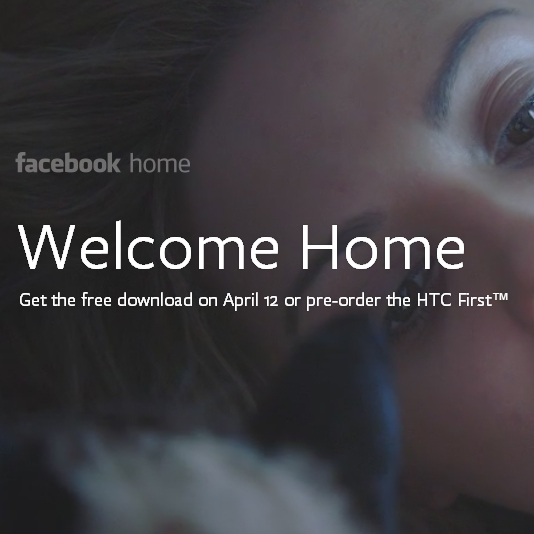 If you’re looking for a review of Facebook home this isn’t it… I’m thinking about how this could play out in the wider market.

>>> TNW – Facebook Home have quite a good round up or you could look on Facebook.com/home.

1) Android fans will hate it, they’ll whine about the loss of widgets, customisation and openness probably.

2) iPhone fanboys (and girls) will not be interested, they’ve likely moved to path or something far more hipster n cool.

So, with them out the way we have two main groups remaining: your average phone user (android but unaware, they think of themselves as a galaxy s3 owner etc) and the average iPhone user.

3) The average user cares about four main things (in roughly this order): messaging/calling friends, photos, Facebook and then apps (music somewhat, but I don’t think that’s the “killer app” anymore). Home quite possibly hits all of these bang on target.

By making it user centric, seamless conversations across text and Facebook messages will appeal, as will activity of friends being tied together.

Apps are still there, they’re slightly hidden but I really don’t think that’ll phase most users.

What about people leaving Facebook/using it less? One of the main reasons people are leaving Facebook is that it’s not people centric, this largely changes that…. but also, the big question…

Ads – this’ll be the maker or breaker – the other thing users are pushing back against on Facebook is ads, if they feature too heavily on home it won’t fly. I’d expect them to add it later, hooking people in at first with a very light touch to advertising. It’s telling that the Facebook share price rose 3% after the announcement too.

Where does this leave your average iPhone user? I guess that depends on the uptake of home, if the iPhone app doesn’t develop, I think there’s a large chunk of users who could move to a Facebook phone that’s more people centric for all of the reasons above.

What about an iPhone 6? Who knows…!

1) I’m expecting Facebook to crack down on companies using a person profile as their Facebook presence in line with a more people centric approach – those gaming the system in this way will initially, quite likely, have an advantage until this happens.

All thoughts, fanboy flaming, comments and paella recipes welcomed below: