Diaspora is a “privacy-centric distributed social network”, anyone can download the source code and set up a pod on their server meaning they have control of the information and user data on that site.

Every pod can talk to each other seamlessly, thereby creating a distributed social network.

What if I don’t want to set up my own social network server?

You don’t have too, there are publicly available ones, including joindiaspora.com and diasp.org.

Think of the pods/network as a bit like the way email is distributed, in that anyone could have an email server of their own or use a public one (Gmail, Hotmail, Yahoo…) and you can seamlessly email other people.

It’s minimal in feel, uncluttered and most things are obvious after a short look around. 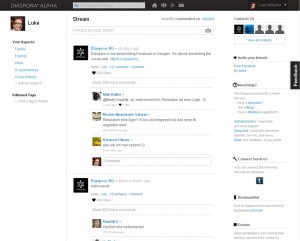 Profile pages are a bit sparse at the moment… with only a few details to fill in – don’t want you D.O.B. listed? Don’t enter it. Simple. 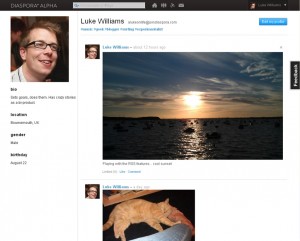 and yes, the first picture I posted was of my cat…

When you invite a friend, you choose an aspect, you can manage these later (adding people into more than one if required): 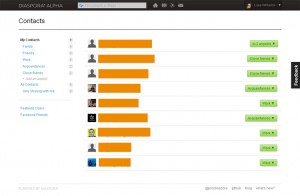 The settings section is deliciously simple and clear: 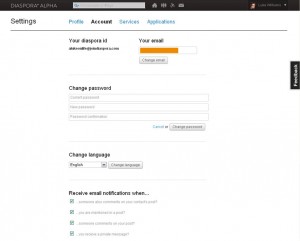 Easy, clear options to switch on/off email alerts, download all your data as XML and close your profile: 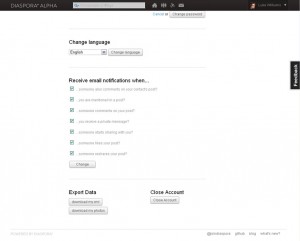 I love the way you post updates, it’s very obvious who will get to see it – the globe shows if it is public (available to search engines and published to your RSS feed) icons for post to twitter, tumblr (not enabled) and Facebook too, decide which aspects to send it to (think circles / friend lists). I can only assume it’s called aspects as groups will be used for something else in a later version.

It’s early days for Diaspora, but I’m really impressed so far – there is a hard-to-put-my-finger-on thing that I just really like about it. Perhaps it’s the minimal feel, the geek in me that loves the distributed nature, the simplicity of the privacy settings or just the sheer openness of the development process!

One to play with if you’re an early adopter, for less technical types wait for the beta release.

UPDATED: I loved these words from Yosem @ Diaspora, so I’m reposting them here

“The media has painted us as the David that will either slay or succumb to Goliath. (Insert FB or G+ for the Goliath, depending on the media’s narrative.)It’s also a function of competitive differentiation. You only know what something is by comparing it to something else that exists. The media has chosen to compare us to FB & G+, which is understandable.

The better comparison, however, is AOL vs the WWW. When AOL appeared on the scene, it was the only commercial email provider. You couldn’t send email to Prodigy, for example, from AOL, and vice versa. AOL would force you to navigate the Internet through AOL’s portal. Then the (free or open-source, use your preferred term here) WWW came on the scene. Soon thereafter came communication protocols that enabled different email providers to connect their users with each other. AOL clung to their walled garden approach and slowly over time was transformed from a monopolist into just one of many actors on the open web …continues“