Twitter spam is nothing new, nor are rogue apps that promise followers and tweet on your behalf… but recently I’ve spotted an odd new trend, what I’m calling the “tweet n delete” twitter spam. 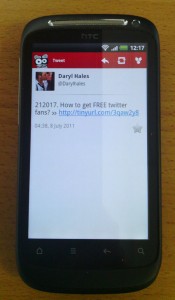 I spotted similar looking spam messages on a couple of accounts recently, when I went to view the accounts to warn the owners on the first 2, there were no messages listed, so I assumed the offending spam issue was resolved….

When I saw one from a friend of mine, I replied to him to suggest he check his authorized apps and he replied he hadn’t sent anything, I checked his feed and sure enough there was no spam… then the following day, there was another one from his account – this time I took a screenshot and checked his feed to find it was no longer listed.

<<<<< screen shot of the twitzend spam

vvvvv Screen capture of the feed for that time 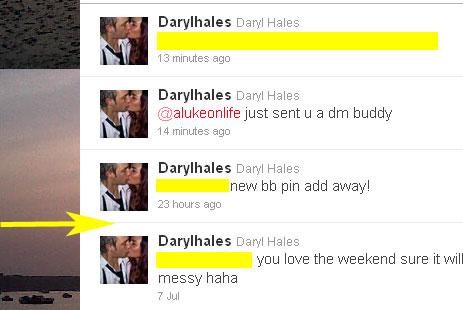 He was keen not to be sending spam, so sent me his login details – as expected I found the rogue app listed (slightly in disguise) – A quick check of the link from the spam message (tinyurl translated to twitzend.info) confirmed it was the app in question and I removed it.

Forgetting the fact it’s a waste of time to fake bulk up your following numbers, beware authorizing websites to update your twitter feed.

If you do see a friends account tweeting anything odd, that’s then not listed in their stream when they/you check later, suggest they go to twitter.com, login, select settings (top right) and applications tab to see what is listed and remove ones they don’t need or recognize.

Thanks to @darylhales, club manager extraordinaire, for letting me login to his account to get to the bottom of this one.