Last weekend, I went to my first BarCamp – BarCamp Bournemouth – a “self organising un-conference”.

If you’ve never been to one, you should go. I wasn’t exactly sure what to expect, I new the history of how they’d started and I had a rough idea what went on… I’m pleased to report it exceeded my expectations.

For those of you who too lazy to click on the wikipedia entry above, in essence its an event where anyone (and everyone is encouraged to do so) can give a talk about pretty much anything. There’s a white board with slots on it for people to write in what talk they’d like to give/discussion they’d like to host. 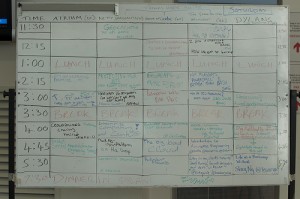 Some of the highlights for me:

Two Guys a smart car and a bagel – which can only be described by “the hodge” himself, go read it.

The crowdsourced haircut – donate £5 to The Dyslexia Research Trust and take a snip at his hair. Erm… ok. 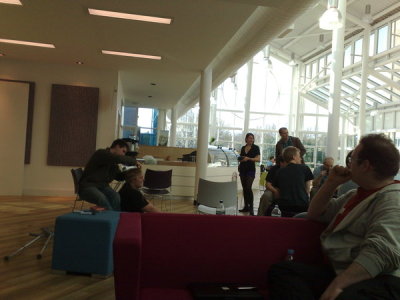 DigitalDeath – this one was a real though provoker, what happens to accounts after people die, does their content get deleted, should it be kept? Do you have a digital will? We also touched on whats happens when people go “off-grid”.

Other talks I attended (some lightning talks) were on Geocaching, how to make a pulse jet engine, “developer vs designers, why can’t we all get along” (by @adrianh) – from the downright geeky (life defined in two lines of APL  code) to the philosophical (A proof that there is only one true fact).

I really loved the talk about the ridiculous diagrams people have developed for Social Media (@socialmediatwat) – it’s so true.

It was really good to hear a developer rip into “social media practitioners” using their own worst examples – I’m always concious that what I do doesn’t get drowned in marketing drivel and buzzwords – so it was really good to get some reinforcement that what’s important is true engagement, it IS sad that some marketeers and agencies need telling that its just conversations online – I think what he missed though is that some people NEED to be shown this stuff, they’re not native to the internet and what they’ve seen before is push push push perhaps.

Next time you see a BarCamp near you, go.