its a sad day

Posted by Luke Williams on December 12, 2008 in general thoughts | 7 comments

I almost posted about getting a shiny new Sony Ericsson phone this week… oh the excitement mounted and then finally yes, there she was all silver n lovely a new c905.

Today I sent her away, to await the new Nokia N97.

So what went wrong?

I should have noticed something was wrong when I didn’t get that, wow factor as I started playing with it.

I’m a geek, so when I get a new gadget, I NEED to be excited about the things it can do that I didn’t know about… really… it didn’t do anything special, apart from allow me to geo-tag pictures with an 8MB camera, instead of a 5MB one. Although as I had GPS on the N95 i must of been able to hack that.

Then things really turned sour when I tried to get my contacts onto the phone, I failed.

After 3 calls to data support. I admitted defeat, I’D FAILED.

(For those of you that don’t know, I used to be the Team leader for Sony Ericsson mobile data support years ago, so this was a crushing blow!)

Setting up a SyncML server – FAIL

That only left, installing nokia datasuite then Outlook express onto my laptop, to then sync my nokia, then install the SE software and then sync the contacts back… but my patience had gone and I’m buggered if I’m going through all that.

There was also the fat thumbs problem, when I pushed the phone (black arrow) due to its lovey curvy edges… and me having fat fingers… the phone would half the time fly out of my hand. doh. 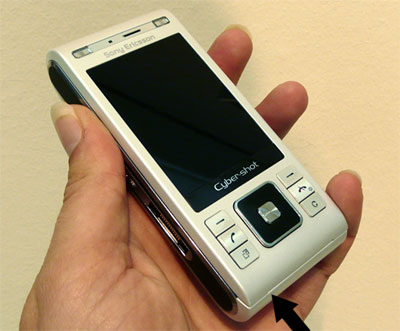 So, I had to have the talk.

Its not you, its me… this just isnt working out… I’m sending you back.

Not sure what to get next, hell no iphone… dont want blackberry to make my internet addiction even worse… maybe the N97 is for me… sob.