Posted by Luke Williams on April 21, 2008 in general thoughts | 2 comments Guillermo Habacuc Vargas – the artist who is was reported had starved a street dog to death, as an art exhibition… it’s been the topic of many an email, online petition… facebook group… blog post… 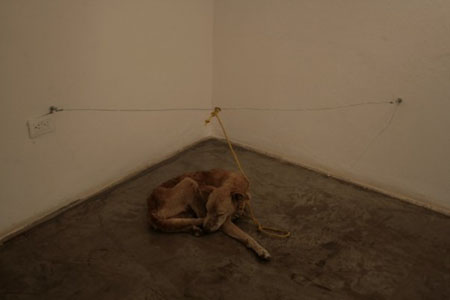 In 2007, the ‘artist’ Guillermo Habacuc Vargas, took a dog from the street, he tied him to a rope in an art gallery, starving him to death.

For several days, the ‘artist’ and the visitors of the exhibition have watched emotionless the shameful ‘masterpiece’ based on the dog’s agony, until eventually he died.

But this is not all … the prestigious Visual Arts Biennial of the Central American decided that the ‘installation’ was actually art, so Guillermo Habacuc Vargas has been invited to repeat his cruel action for the biennial of 2008.

Please join and sign the petition to stop Guillermo Vargas from starving a dog to death at the Bienal Centroamericana Honduras 2008, as he did in 2007.

If you take 2 mins to check the story, which people NEVER do with these kind of things, you’ll find the exhibition owner explained they fed the dog when the museum was closed and then released the dog back to the streets at the end.

Taking aside the potential cruelty of having a dog in a gallery, which is hard to judge having not seen it, the artist made a very clever point about how outrage spreads when its a dog dying for art… but where is the same passion about the street dogs who die everyday?

This is an old story but the amount of emails/facebook messages I’m getting about it seems to be growing, still.

Please people, it’s the internets, don’t believe everything you read without checking it.