I told you she was dodgy… Hilary Clinton = outright liar

“I remember landing under sniper fire, there was supposed to be some kind of a greeting ceremony at the airport but instead we just ran with our heads down to get into the vehicles to get to our base.” 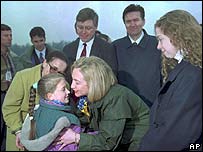 In other words, a complete and utter lie… now I might be wrong, I’ve never had a diplomatic greeting or been under sniper fire… but I’m pretty sure I’d remember the difference.

Getting figures wrong, is “mis-speaking”… perhaps getting the year or place wrong I’d allow… but thats just an out and out fib, its a fabrication of the truth, its a big ol’ pile of bulllsh~t… a LIE!!!

I stand by my earlier entry, she’s an evil corporate puppet who’ll lie and cheat as it suits.