tidal waves and other watery updates

Its been a week of watery fun.

1) On tuesday we had a flat mate outing to Thorpe Park to ride every rollercoaster (weeeeee, wooop woooop!) and the Tidal Wave water ride, now when I see on a poster “you will get very wet” I’ll understand what it means. 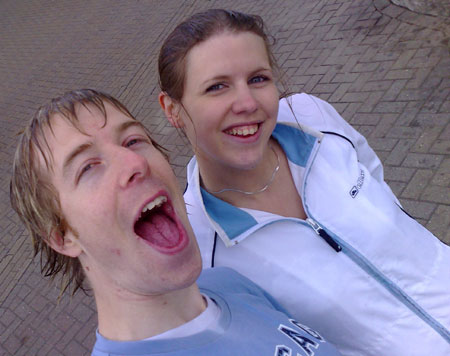 2) Today saw another sea swim in the Pier to Pier training, 4 groynes against the tide and 4 back… seeing how against is at least twice as hard (and that it took about the same time as it takes me to swim 120 lenghts in a pool) going against the tide this makes roughly 12 groynes I swam in the sea… which is cunningly the same I have to swim Pier to Pier in 10 days! Holy FSM I’m knackered.

Being that all things come in 3’s (watery things included)…

3) Ironing some (wet – see there is a link there…) shirts today I realised a few things about my wider life goals… I want to get to the point where I can pay someone to iron shirts for me. No, no its not a lazy thing… it’s quite logical. A) I’m bad at ironing shirts, I’ve tried… read articles n been shown… I’m just not good at it! B) It takes a lot of my precious time. So for efficiency and qualities sake I am reminded of one of lifes success rules (cue cheesy american infomercial type voice): Don’t waste time on things you’re not good at. Work out the cost of your time to do it vs the cost of someone else doing it and factor in the outcome quality (crinkly vs presentable!) to determine if its better to get someone else to do it.

Hmmm I need to apply that to a few other areas!

Sorry if its been ages since my last blog, its all been hecticamondo! I’ve done an extra show or two on FIRE… covered a couple of extra gigs here n there and BAM!!! A weeks gone… geeky loser confession… I’ve had cravings to blog… comes back to that internet addiction thing I guess!

Anyway… almost done for now, just a quickie to say I’m playing at Toko on Friday, Censo on saturday is the first of my new residency (I’ll be bi-weekly from Aug 4th – see myspace for dates) then monday… assuming its confirmed (looks 98% on so far) I’m flying to a gig in glamourous… sunny… erm… north wales! Woooooo! Well it is with the cut up boys and I get a hotel so it’ll do me.