Posted by Luke Williams on April 12, 2006 in general thoughts | 4 comments Yesterday I invited a friend over to lunch… (being known for my slightly un-orthodox cooking methods) in a moment of inspired genius, she decided that rather than me cook something, she would challenge me to a bout of ready, steady… cook!

So, shortly she’ll be arriving with £5 worth of ingredients, which are unknown to me and expecting me to russle up some form of culinary delight within 20mins… wow, my life is non-stop keeeeraaaazzzzeee fun kids!

I’m sure you’re all dying to know what happens, so I’ll post a pic and recipe here for you later…

I’ll get my coat…

Gently fried the leeks and onion in butter and olive oil, with pepper and basil.
Cut the chicken up and browned it off with paprika and pepper.
Start the rice.
Pile everything into the same pan, add mushrooms and tomatoes a tiny bit of flour to thicken the juices… then the rice… 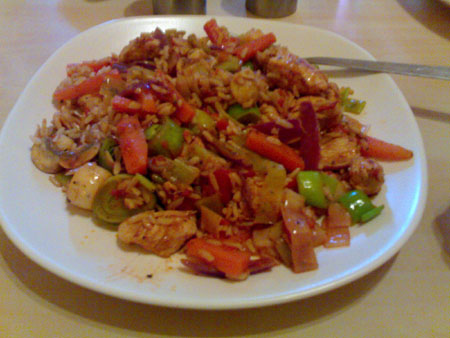 tiny bit disappointed.. I wanted a challenge! Some weird piece of fish, or an obscure veggie… ah well, maybe next time…