Playing with a Blackberry Playbook

Yesterday I got to spend quite a bit of time playing with the new Blackberry Playbook, I know plenty of people who follow me on twitter were keen for me to write my thoughts about it after I sent a twtpic photo of it out…  so forgive me a slightly off topic blog post for once!

Disclosure: I was presenting at a Blackberry Sponsored o2 lunch event, talking Social Networking, Mobile Apps and Relevant legislation (ASA CAP Code etc) – that said, these opinions are entirely my own ( I did ask if it was ok to write a blog post). 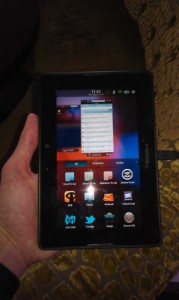 So in no particular order, my thoughts:

Ok, I could of chosen my words better but hey it made my friends laugh… seriously though, it feels a much more natural size to hold and use with one hand. Which is annoying, I was sure I wanted a 10″ android tablet until using the playbook.

Swiping from the top brings up a menu, from the bottom it goes to the tasks/launcher screen (as in the pic) and sideways switches between running apps. It’s intuitive and I really liked the fact this leaves the rest of the front of the device free of buttons.

I watched an HD clip on the device and it really blew me away how sharp the picture was (HDMI out too) plus being a widescreen device it filled the screen. (1024×600)

I either missed, or the one I used didn’t have the android emulator – would of loved to try this.

5) Take it to the (Blackberry) bridge

Tethering to a Blackberry device was quick and seemed to work well, from what I saw on my limited play it uses the information from the phone – not syncs it. If I got this right, I think that’s pretty clever, you could give this to your kid, lose it, break it without compromising user details. Internet via 3G worked well.

Some reports have said it was quite “laggy”, I didn’t really notice this, although I wasn’t specifically trying to run loads of apps (although when the video was running flicking to another app worked just as smoothly).

Overall what did I think?

I was honestly pleasantly surprised at how smooth it was and how good it looked. I LOVED the size, it’s made me re-evaluate which tablet I’ll get (I want one for presenting especially) .

Would I get a playbook? Probably not, but that said, if I was a Blackberry user I would definitely get this device.

For business use in a person to person (think being on a stand at a show or door-to-door) it’s much better to hold than an ipad being 7″ and lighter, with the Blackberry bridge a great combo.

Personally, I’m still set on an android tablet – I had decided on the Asus Eee Transformer… but now I’m looking at 7″ ones…