Posted by Luke Williams on December 8, 2005 in general thoughts | 0 comments It’s official (well its not really, but I’ve decided it is) we now live in “the future”!!!

Foldable, rollable flexible displays are here – Currently around the size of a newspaper, these displays are now a reality, the best bit being that once they’re set to display a page (future newspaper?) it doesn’t require more electricity, it stays in that state… cooool. 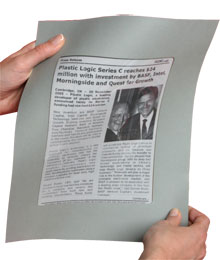 The Japanese have invented see through fabric, its still a prototype at the moment but the video freaked me right out! It works by having cameras that see whats on the opposite side and displaying that on the front, you could make out outlines but its still scary stuff.

House robots are here! From automatic vacuum cleaners to the latest Sony humanoids, these guys are getting scarily real now… they respond, talk, walk and learn stuff! I, Robot. (note to self, must see this film)

Computer graphics are pretty much indestinguishable from reality. How many films/adverts/games have you seen that look real? whoooaaa…

“TV on your mobile”

They’ve developed a type of printer that can make organs, at the moment its limited to simple structures, but the proof of concept worked… its estimate they’ll be able to grow livers n things within 2 years!!!!

And finally for all you Sci-Fi fans… Ion thrusters on the last mars mission and lasers in testing by the US military, stealth planes… remote drones, operable by handheld PDA’s in the battlefield.

I woke up today and realised, I’m living in the future… how the hell did that happen? Cheeky bugger snuck up on me!