Posted by Luke Williams on November 16, 2005 in general thoughts | 5 comments 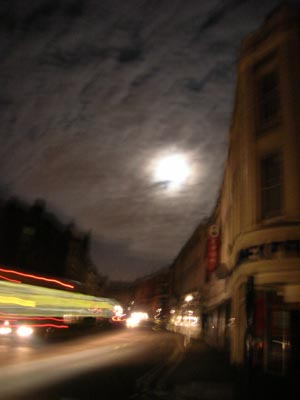 I left my house just as the power cut happened about 930am, assuming it was quite a local outage, I thought I’d take the chance to go to asda… nope, everywhere off.

Can’t describe the atmosphere as I walked around, people stood outside office blocks having a quick fag while they worked out what was going on, no power anywhere except emergency lights.. traffic chaos where the signals were off… then as the day wore on and it became known that power wasn’t likely till the next day, Bournemouth became a spooky ghost town!

Had to go out n take a few pics after dark, not sure they fully capture the atmosphere, but close. Nice change to eat dinner… cooked on my camping stove by candlelight! 🙂

Respect to Bliss and the off liscense down the road for opening in candlelight.

Makes me think about our impending energy crisis and how we’ll all be knackered when we run out of oil unless stuff changes… but hey, no-one cares right? I mean, lets not bother to take any action until the power actually runs out… hmmm.