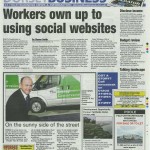 A nice little piece on the front of Dorset Business, talking about the survey we undertook with Liz Lean PR.

More information on the ASA CAP code and our survey findings.

As well as the social media training we offer, we also work with organisations to create or review best practice and acceptable useage policies. For more information, please call the office on 01202 79098 or drop us an email.

Changes to the ASA CAP code and our survey results

Working with the team at Liz Lean PR we conducted a snapshot survey of 100 people (around Bournemouth, in February) to see what the general population were saying about their employers online and if they’d received any guidance from their employer on what they should say.

This was partly inspired by the upcoming (now live) changes to the ASA Cap Code:

“From 1 March, marketing communications on companies’ own websites and in other third party space under their control, such as Facebook and Twitter, will have to adhere to the non-broadcast advertising rules as set out in the CAP Code.” (Source: ASA)

A (massively) simplified version of the code would be: ensure that all your communications are legal, decent, honest and true.

Full details and responses to the survey in our press release on Pressitt.

The two key findings that stood out for me were:

Think about that for a minute, the implications that 1/2 of your staff are writing about your business online on social networks… and it’s not just the expanded ASA remit that needs to be considered, regulation such as the FSA could also apply to your business.

Liz Willingham, from Liz Lean PR summarises it better than me:

“The results of our survey highlight the importance of good communication from the top down. As ambassadors of your brand, employees need to be made aware and given comprehensive guidance on how to conduct themselves in all situations to protect the overall reputation of the company.”

We’re looking to put on an event for our clients after Easter, in the mean time if you’d like any guidance please do drop either of us a line.

If you want some interesting views from leading experts on the new ASA Cap code changes I strongly recommend this eConsultancy post.