Users vs Usage and why Google plus is NOT number 2

Posted by Luke Williams on February 4, 2013 in geeky stuff | 3 comments 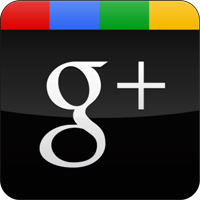 Am I the only person on the planet who understands the difference between users and usage?

“Infographics” (I don’t class this as such personally, but that’s for another day…) like this one: 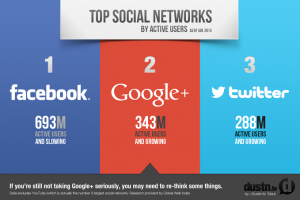 …and there are a multitude of “OMG G+ is the new number 2, go go go!” posts, all referencing one survey.

There’s quite a few things that trouble me about this:

1) Active users is not the same as usage. If you’re saying g+ is number 2 do you really believe that it has more activity than YouTube or twitter?

The survey that started this asked “Have you used [social network] in the last month?” – I’ve logged into G+ in the last month… I’ve also logged into twitter, multiple times daily… that question clearly misses quite a few important measures of activity – frequency of posting being the big one.

2) Google plus is not just a social network, it’s many other things. How they define active users on G+ includes comments on YouTube from linked accounts, reviews on play and logged in social searches.

Vic Gundotra (Googler) explains in a comment here: ”100M active monthly users on G+ site itself or its mobile” and “the numbers at I/O were google+ users all across Google” (I/O was some time ago, true)

3) Experts that don’t explain the difference, blindly retweeting and proclaiming that it is number 2, worry me, a lot.

We should be asking, why are these people flogging this slightly sick horse? It’s not possibly that their livelihood depends on selling services to help you use said new struggling equine?

4) Users don’t know they have Google+ or don’t want it:

“The amount of times I’ve deleted my G+ account, only to find something else had created one again for me, too.. *sigh*” (via twitter)

That said, you probably think I’m not a Google plus fan?

You’d be wrong, I think it’s a great platform. Circles work brilliantly, it’s clean, ad and spam free… it is just not used much outside of early adopters & tech journalists.

I would suggest every business has a places page that you keep up to date… but actively using it to build a network of followers? I’d be very surprised if it has a return at the moment.

The final often quoted benefit of Google+ is the improved ranking in search – this is a good question, search as hard as I may I can’t find any authoritative posts that support this, other than with social plus search.  Social factors are included in google, sure, but on the current user base with limited active networks does this warrant the time spent?

Let’s be clear, if someone you’re connected to on G+ has +1’d something: yes, it is more likely to appear in your search results.

If you have evidence of other benefits of being on G+ that I’ve missed, please do post them below. I love being wrong and I’m more than happy to change my mind, I like Google+.

Important update: There is one factor in Google+ that I’ve been watching closely, authorship. Google+ acting as an online identity to give an article weight in search rnakings. This has been confirmed by Eric Schmidt in a Wall Street Journal article at the weekend:

“Within search results, information tied to verified online profiles will be ranked higher than content without such verification, which will result in most users naturally clicking on the top (verified) results. The true cost of remaining anonymous, then, might be irrelevance”

See also this excellent reply to my post in the Google+ group by Paul Tansey from Intergage.

There’s quite a lot of articles that reference an Author rank checker tool (I refuse to link to it here) as “proof” of authorship, it’s a spoof. It just uses maths to make up a number. The maker of the tool posted the below in this discussion thread on G+:

“Re: the comment “But Author Rank may be coming. Learn more about it here”

To be honest I feel there are far too many articles like that around allready.

The joke wasn’t just intended to be on the people checking their Author Rank but was also a joke about the fact there are so many articles about Author Rank as it is.”

There seems to be a lot of unfounded chatter over the benefits of authorship, without any solid proof or studies that have now become accepted as fact.

As an aside – I’ve enabled authorship on this blog to see if I can track any change.