Posted by Luke Williams on January 28, 2008 in general thoughts | 0 comments 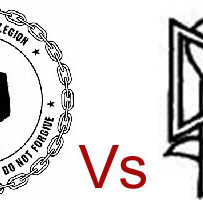 A few websites went down (some still down), a couple of protests happened, some more videos went on youtube, a few news channels got on the story…

It’s kind of creepy, don’t you think? Like some bizarre film… an anonymous group with no leadership is taking on a money making cult that believes in an evil extra-terrestrial being called Xenu! I mean come on, you couldn’t make it up!!!

the next phase of the “war” has been declared as a series of peaceful protests on Feb 10th 2008 outside Scientology buildings around the world (inc 6 in the UK – not Poole).

If you were so inclined as to get involved, you may find information about the London meeting on the internets… …ahem (NSFW)…. Anonymous are encouraging all to join them in this protest…

i’m curious how many people will turn up globally and if the news networks run a story – seeing how they seem scared to do so, due to Scientologys litigious nature.