Posted by Luke Williams on January 21, 2008 in general thoughts | 1 comment Oooh, I bet that caught Sarah’s attention if no-one else!

He’s the former publisher of the Western Standard in Canada, who is being forced to defend his right to free speech in Canada by a Saudi Arabian trained Imam who has placed a complaint with (ready for the irony) the Human Rights Commission in Alberta – after he re-published those Danish cartoons of Muhammed some time ago.

I love the irony that so often rears its head when islamic issues come to light, my favourite ever has to be this poster: 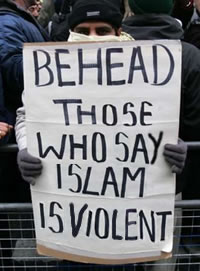 Ok, joking aside about the fact it is a Saudi Arabian making the complaint, there’s a number of issues raised which I think are generally very important to us all.

In his defence when asked his intent on publishing the cartoons, he answered that he had given numerous interviews answering his real reasons for publishing them but his answer to the HRC was that it was the most offensive reason listed in the complaint against him, and, that it is his right to publish them regardless of his intention. An interesting approach, his intent is to make it a freedom of speech/press issue.

Is it a freedom of press/speech issue or is it one of discrimination/hatred towards another human being (ie the complainant human rights)?

This section from his interview is superb, he is challenged about how his publication may of caused offence and increased discrimination towards muslims – to my mind he gives one of the clearest real reasons for increasing tensions with muslim communities, everyone should watch this.

Springers final thought for today: “Religion – A daughter of Hope and Fear, explaining to Ignorance the nature of the Unknowable” Ambrose Bierce