Posted by Luke Williams on November 6, 2007 in general thoughts | 0 comments Hello from Down Under!

1) STUPID WAR ON TERROR
– pffft, thanks to increased security measures not only did I have to get on and off a plane at the same gate having been through customs/security check, only to sit in the same seat… but at every stage of my journey, I had to keep abandoning water bottles.. a right royal pain in the behind. Stupid war on terror… shoes on, shoes off… bla bla bla… anyway, its all good.

2) Annoying fat people
– I’m going to be sizest, apologies. If you’re too fat to walk down the aisle of the plane without having to wobble sideways knocking (and here’s my gripe) and waking everyone up… then to me, you’re a potential emergency exit blockage hazard and shouldn’t be on my aircraft! haha I sound grumpy, must be the being awake pretty much since Saturday (its now Tues midday)

Most of the last 3 days has been spent in what feel like a seat in a cupboard, or some fake environment… like this 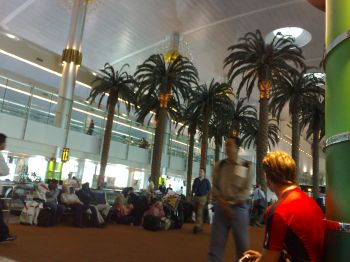 its been nice to arrive at Chez benton, have a shower and sit on his balcony watching parrots and other bright coloured things flit about.

I need a snooze now. Ciao!