Posted by Luke Williams on October 18, 2007 in general thoughts | 0 comments

“quick, quick, the scientologists are coming… and they’re disguised as a swing band!!”

Well kinda, I was highly amused (and a bit scared) to see that the scientologists had a stage in the square today with the Jive Aces performing swing hits. The guys giving out leaflets were a bit sinister looking, I tried to get a pic but they saw me and started coming over so I ducked into a shop. haha.. I felt like some sorta secret anti-cult agent… If I die in an “accident” in the next few days, avenge my death please! Nah, only joking… i hope…

Here’s the pic I did get, with a close up of the sign. 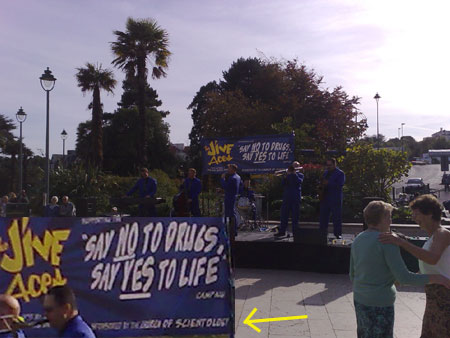 Dont forget kids, “say No to drugs, say Yes to life” – if a swing band says so, then well you’d better listen. 🙂

For the record, I think they’re THE most dangerous religion in the world right now, more so than jihadist fundamental muslims.