Scientology seem to be taking on the BBC over a panorama documentary due to be shown tonight on BBC 830pm. 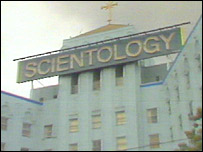 John Sweeney of the BBC claims to of been subject to all manner of hostility whilst trying to make a documentary about Scientology. Harrassed, followed, shouted at, friends n family subject to similar treatment, meant that at one point during filming he lashes out at one of their spokesmen and they’ve made a complaint.

Whats interesting to me is how aggressively this religion/cult has persued him simply for asking questions, what do they have to hide? I cant wait to find out. Watch it people, dont live life blind!