Posted by Luke Williams on February 2, 2007 in general thoughts | 1 comment Every year, I raise a toast to Punxsutawney Phil, the weather predicting groundhog – to me it acts as an annual reminder to not get stuck in a rut (as per the film of the same name).

No idea what I’m on about? 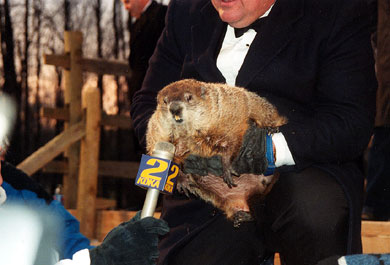 “On February 2, Phil comes out of his burrow on Gobbler’s Knob – in front of thousands of followers from all over the world – to predict the weather for the rest of winter.

Take 2 minutes out today and think “Am I living in a groundhog day?” Hmmm… the timing of this seems a bit spooky considering decisions I have to make.

El Nino has caused high winds, heavy snow, ice and freezing temperatures in the west.
Here in the East with much mild winter weather we have been blessed.

On this Groundhog Day we think of one thing.
Will we have winter or will we have spring?

On Gobbler’s Knob I see no shadow today.
I predict that early spring is on the way.”